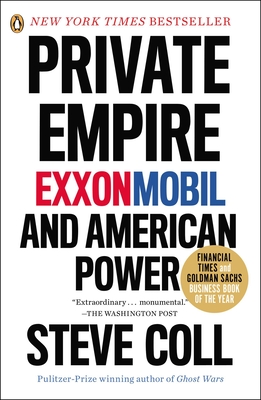 By Steve Coll
May Be Available to Order
Limited Availability. We can look into it for you. Availability not guaranteed.

From the award-winning and bestselling author of Ghost Wars and Directorate S, an “extraordinary” and “monumental” exposé of Big Oil (The Washington Post)

Includes a profile of current Secretary of State and former chairman and chief executive of ExxonMobil, Rex Tillerson

In this, the first hard-hitting examination of ExxonMobil—the largest and most powerful private corporation in the United States—Steve Coll reveals the true extent of its power. Private Empire pulls back the curtain, tracking the corporation’s recent history and its central role on the world stage, beginning with the Exxon Valdez accident in 1989 and leading to the Deepwater Horizon oil spill in the Gulf of Mexico in 2010. The action spans the globe—featuring kidnapping cases, civil wars, and high-stakes struggles at the Kremlin—and the narrative is driven by larger-than-life characters, including corporate legend Lee “Iron Ass” Raymond, ExxonMobil’s chief executive until 2005, and current chairman and chief executive Rex Tillerson, President-elect Donald Trump's nomination for Secretary of State. A penetrating, news-breaking study, Private Empire is a defining portrait of Big Oil in American politics and foreign policy.

Steve Coll is the author of the Pulitzer Prize-winning Ghost Wars and the dean of the Graduate School of Journalism at Columbia University, and from 2007 to 2013 was president of the New America Foundation, a public policy institute in Washington, D.C. He is a staff writer for The New Yorker, and previously worked for twenty years at The Washington Post, where he received a Pulitzer Prize for explanatory journalism in 1990. He is the author of seven other books, including On the Grand Trunk Road, The Bin Ladens, Private Empire, and Directorate S.

“Fascinating… Private Empire is a book meticulously prepared as if for trial, a lawyerly accumulation of information that lets the facts speak for themselves… a compelling and elucidatory work.”—BLOOMBERG

"ExxonMobil has cut a ruthless path through the Age of Oil. Yet intense secrecy has kept one of the world's largest companies a mystery, until now. Private Empire: ExxonMobil and American Power is a masterful study of Big Oil's biggest player… Coll's in-depth reporting, buttressed by his anecdotal prose, make Private Empire a must-read. Consider Private Empire a sequel of sorts to The Prize, Daniel Yergin's Pulitzer-winning history of the oil industry… Coll's portrait of ExxonMobil is both riveting and appalling… Yet Private Empire is not so much an indictment as a fascinating look into American business and politics. With each chapter as forceful as a New Yorker article, the book abounds in Dickensian characters.”—SAN FRANCISCO CHRONICLE

"Coll makes clear in his magisterial account that Exxon is mighty almost beyond imagining, producing more profit than any American company in the history of profit, the ultimate corporation in 'an era of corporate ascendancy.' This history of its last two decades is therefore a revealing history of our time, a chronicle of the intersection between energy and politics."—Bill McKibben, NEW YORK REVIEW OF BOOKS