Yes, I Can Say That: When They Come for the Comedians, We Are All in Trouble (Paperback) 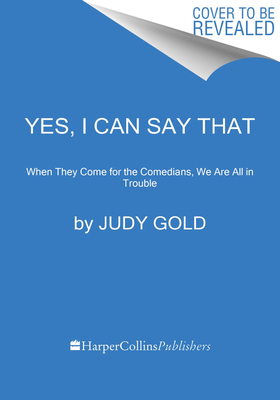 "No one makes me laugh harder than Judy Gold. If I had to pick one comedian to write a book about free speech, it would be Judy." – Amy Schumer

From award-winning comedian Judy Gold, a concise, funny, and thoughtful polemic on the current assault on comedy, that explores how it is undermining free speech and a fundamental attack against the integrity of the art.

From Mae West and Lenny Bruce to Richard Pryor and Howard Stern to Kathy Griffith and Kevin Hart, comedians have long been under fire for using provocative, often taboo subjects to challenge mores and get a laugh. But in the age of social media, comedians are at greater risk of being silenced, enduring shaming, threats, and damaged careers because of angry, censorious electronic mobs.

But while comedians’ work has often been used to rile up detractors, a new threat has emerged from the left: identity politics and notions like "safetyism" and trigger warnings that are now creating a cultural and political standard that runs perilously close to censorship. From college campuses to the Oscars, comics are being censured for old jokes, long-standing comedy traditions, unfinished bits and old material that instead of being forgotten, go viral.

For comics like Judy Gold, today’s attacks on comics would have Richard Pryor and Lenny Bruce "rolling in their graves." "No one has the right to tell comics what they can or cannot joke about. Do you tell artists what they can or cannot paint?" she asks. Freedom of speech is fundamental for great stand-up comedy. Humor is the most palatable way to discuss a subversive or taboo topic, but it better be funny. A comic's observations are deliberately delivered to entertain, provoke, and lead to an exchange of ideas. "We are truth tellers." More important, the tolerance of free speech is essential for a healthy democracy.

In addition to offering readers a quick study on the history of comedy and the arts (noting such historical reference points as The Hays Code) and the threats to them, Gold takes readers on a hilarious ride with chapters such as "Thank God Don Rickles is Dead," as well as her singular take on "micro-aggressions," such as:

Person: "OMG! You’re a lesbian? I had no idea. I mean you wear make-up. When did you become a lesbian?"

Judy Gold: "Coincidently, right after I met you!" (micro-assault!)

In this era of "fake news," partisan politics, and heated rhetoric, the need to protect free speech has never been greater, especially for comics, who often serve as the canaries in the coalmine, monitoring the health of our democracy. Yes I Can Say That is a funny and provocative look at how safe spaces are the very antithesis of comedy as an art form—and an urgent call to arms to protect our most fundamental Constitutional right. There's a good reason it was the FIRST amendment.

Rosie O’Donnell Show, and has starred in comedy specials on HBO, Comedy Central,

and Logo. She has also written and starred in two critically acclaimed, Off-Broadway

hit shows: The Judy Show—My Life as a Sitcom and 25 Questions for a Jewish

Mother. She is currently the host of the hit podcast Kill Me Now.

"Judy Gold is one of the best black women comedians in the world. I'm both a student of her comedy and a follower of her teachings. The fact that we, the public, have a chance to read her book is perhaps the greatest gift that mankind has ever received. Read her book. Listen to her book. Freebase her book; it's incredible."
— Chris Rock

"In this staunch defense of comedians, Judy skewers a corrupt administration that regards the First Amendment as a nuisance. Using years of onstage experience and an impressive knowledge of American humor, she irrefutably demonstrates the critical role comedians play in keeping us connected, informed, empowered and laughing. Also, have you met Judy? Not a big hold-er back-er. I’ve known her for years to be ridiculously funny, and she has the intellectual bona fides to get you reading every page of this book."
— Kathy Griffin

"Judy Gold is the voice we need to cut through all the bullshit. I love her and she always makes me laugh. We need her now more than ever."
— Margaret Cho

“Judy Gold warns us all what happens when they come for the comedians. She shows how urgent and critical it is that we, as comics, speak truth to power—before it's too late. Yes, I Can Say That is funny and insightful—pure Judy!”
— Rosie O'Donnell

“The fact that the world needs a book like Yes, I Can Say That is appalling. That the marvelous Judy Gold has written it is a gift. With wisdom and unsparing clarity this book explains the crucial—yet too often overlooked—role comedians have played in in our country’s history and gives us a sane perspective on our insane society. Pick up or download this book NOW. It will make you laugh while reminding you why it’s vitally important to do so.”
— Lewis Black

“Gold’s defense of comedy, filled with great jokes and stories of censored comics, is a reminder that freedom of speech is no laughing matter.”
— Publisher’s Weekly

"A powerful, and powerfully funny, argument in support of how vital free speech is to comedy and comedy is to us."
— Booklist