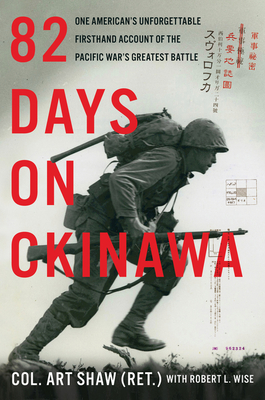 By Art Shaw, Robert L. Wise
$28.99
Available and Ships as Soon as Possible.

"A gritty, first-person account. ... One can hear Shaw’s voice as if he were sitting beside you." —Wall Street Journal

On Easter Sunday, April 1, 1945, 1.5 million men gathered aboard 1,500 Allied ships off the coast of the Japanese island of Okinawa. The men were there to launch the largest amphib­ious assault on the Pacific Theater. War planners expected an 80 percent casualty rate.

The first American officer ashore was then-Major Art Shaw (1920-2020), a unit commander in the U.S. Army’s 361st Field Artillery Battalion of the 96th Infantry Division, nicknamed the Deadeyes. For the next three months, Shaw and his men served near the front lines of the Pacific’s costliest battle, their artillery proving decisive against a phantom enemy who had entrenched itself in the rugged, craggy island.

Over eighty-two days, the Allies fought the Japanese army in a campaign that would claim more than 150,000 human lives. When the final calculations were made, the Deadeyes were estimated to have killed 37,763 of the enemy. The 361st Field Artillery Battalion had played a crucial role in the victory. The campaign would be the last major battle of World War II and a key pivot point leading to the bombings of Hiroshima and Nagasaki, and to the Japanese surrender in August, two months after the siege’s end.

Filled with extraordinary details, Shaw’s gripping account gives lasting testimony to the courage and bravery displayed by so many on the hills of Okinawa.

COLONEL ARTHUR “ART” SHAW (1920-2020) was a Field Artillery Unit Commander for the 361st Artillery Battalion of the 96th Division during the battles for Leyte and Okinawa. His numerous medals include the Bronze Star. He reached the rank of Lt. Colonel in the U.S. Army and was appointed full Colonel as a member of the U.S. Army Reserves. His wife, Joan, passed away in 2002 after sixty years of marriage. Colonel Shaw died on March 13, 2020, at the age of 99, one week after the publication of 82 Days on Okinawa.

ROBERT L. WISE is the author of 34 books, including five which cover the World War II period.

"A gritty, first-person account remembered from the vantage point of 75 years later. One can hear Shaw’s voice as if he were sitting beside you reminiscing through misty eyes about the defining moments of his youth."
— Wall Street Journal

"82 Days on Okinawa is a personal view of war that is heartfelt and poignant. Col. Shaw’s account of the day-to-day grind brings new life to the historical record. His reflections of home and his longing to return, interspersed with the upcoming engagements, make for an impactful narrative. A fine autobiography/history book for all to enjoy.”
— Portland Book Review

“A comprehensive and action-packed memoir of the Battle of Okinawa…This dual perspective gives the book a wide-angled view that’s unusual in a soldier’s battle memoir…a satisfying presentation of the bloodiest battle in the Pacific Theater of WWII.”
— Publishers Weekly

"A vivid re-creation of a campaign so vicious that the soldiers involved rejoiced when they heard about Hiroshima."
— Kirkus Reviews